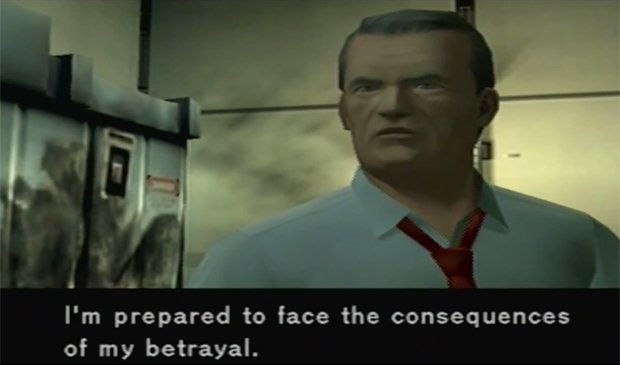 The setup for these posts is simple: I’ve never played a Metal Gear Solid game before, and I want to change that. I’m going to be writing my on-going reactions to the games as I go, and sharing them with the world. The Metal Gear Diaries are somewhere between a full critical essay and twitter gut responses, and will form an honest document of my shock, frustration and surprise at the events of, say it with me now, “Metal Gear?!” They will be packed with spoilers for all Metal Gear games!

Last time, the game suddenly decided to explode, and now I have no idea what the hell’s going on! Am I a bad enough dude to resuce the president? Am I the president? Do I exist?!?!?! (Almost certainly not).

So many of the setpieces – and story beats – are direct riffs on those from the original game.  I have to find a remote controlled missile launcher, I have to take down an aircraft with a Stinger, I have to find out the identity of the Cyborg Ninja. I wonder whether that will have any real explanation in the game, or whether it’s purely to play into the fact that Sons Of Liberty is so clearly a game about games.

Games about games have become incredibly common in western spaces over the last decade or so, but Sons Of Liberty feels so far ahead of your Bioshocks and your Spec Ops in terms of its commentary. The things that it is about – the tension in the relationship between player and creator, player entitlement to immediate reward, fans not actually understanding what makes the art they love good – are all still relevant in games today, if not more so. It’s got so much more going on than just “it hates the player” or “it’s a middle finger to the fans,” there’s no singular Would You Kindly moment (even though, you know, Raiden also probably doesn’t exist).

I think that’s my favourite thing about how Sons of Liberty approaches its meta-commentary, is that it doesn’t exist to shock you. It does toy with player expectation, it does hold the player in contempt, and it does raise questions about your agency and entitlement in engaging with someone else’s art – but it doesn’t do any of those things to show off that it’s doing them. It’s an honest exploration of those ideas without an in your face swagger. Metal Gear’s form of indulgence is far more earnest than that, and it is that earnestness that holds the whole thing together in moments of anime nonsense, anti-war drama or when it’s telling the player that they don’t matter at all.

Alas, My Finger Must Have Slipped

So. Okay. So much happened in the last cutscene, and the entire state of the world is flipped upon its head. I don’t usually do this, but I need to do a little summary just to see if I’ve got it all. The Patriots are the secret organisation controlling America, but they go even higher than that? It’s a council of twelve, The Wise Men, who make the decisions for the state of the world, performing the illusion of democracy in order to placate the public. Sick of being pawns, The President wants to join them, but Solidus wants to end them and remove their power, and now we have this whole situation right here.

Also Big Shell is the new Metal Gear which, yeah, called it. High fives all around!

Anyway, what I love most about this series of reveals, is that on the surface it seems like a standard “Illuminati!” conspiracy, where the answer is that everything is being controlled by a select few and that’s why the world is bad. Usually those kind of conspiracies perpetuate conservative ideologies, playing into the fear of the man, in order to emphasise *coghs everywhere* “traditionally American values” of freedom, personal liberty and not paying tax.

But as it’s introduced here, it’s framed in the complete opposite light – which may explain why so many Metal Gear Solid fans fell off after this game, because the first game definitely allows itself to be read as a pro-military action hero story if you’re only half paying attention. Here, there is no room for misinterpretation – Sons of Liberty is a pointed anti-american and anti-capitalist text. It takes its common rhetoric about war, that Soldiers cannot escape it and all are hurting within it, and applies it to the power structure of its own universe.

Sons Of Liberty is keenly aware of the systemic nature of agency. Soldiers have choices, they can fight for what they believe in, but they are soldiers on a battlefield, and the only way to be free of that is to be free of war. Here, The President talks similarly into his lack of power under The Patriots – “there is no difference between submission and rebellion.” One person cannot change the systems which enforce the power structures of the world, no matter how powerful they may be.

Which is why this reveal focuses on The Patriots fear of the internet, of the ever increasing flow of information, of what happens when people all around the world can collectively organise and work for the end of the system keeping them in check. If information is able to flow freely then the structures that keep The Patriots in control are able to fall, as they’re built on a bed of lies and misinformation. And the only way to keep control, is to build bigger and bigger weapons, to put their foot down harder and harder.

So much of what Sons of Liberty is about to so far centers on a denial of individualism. This comes out through its meta-commentary on games (you do not matter), through its portrayal of soldiers and now through the state of its world. Even Snake’s goal isn’t to save the world, it’s to expose the lies of nations and governments in order to incite others into action. You do not matter. We matter.

Plus, this scene – and the earlier scene with Snake and Raiden – stick out due to their sympathy to terrorism. Much like Deep Space Nine, a show that examines these ideas superbly and consistently, it asks the question of how valid acts of terrorism may be, if they are in the service of bringing down a corrupt and powerful system? When Raiden calls Snake out on his methods of taking down Metal Gear across the world as being “more like terrorism,” Snake simply says, “that’s a fair comparison.” Even Solidus Snake is clearly not the big bad guy anymore, he wants to disable Wall Street and cause chaos, but with the end of softening the Patriots hold on the world.

It’s not quite on the level of Final Fantasy VII, a game in which you play as a group explicitly referred to as eco-terrorists, but it’s certainly up there, and it uses the abstraction of its goofy anime reveals in order to have a conversation about enforced, structural violence vs the violence of individual acts with the aim of dismantling those systems.

What is very clear, however, that November 2001 is the latest this game could have come out. I’m interested to see how MGS approaches these ideas in a post-9/11 world, where these words came to have different contexts than they did before. I assume Snake Eater won’t touch on it too much, being a 60s Bond Movie, but The Patriots are central in Guns of the Patriots, so we can only see.

It’s weird being someone who knows the events of 4’s ending, but none of the thematic context to any of them. I’m so interested in what lies behind these doors.

Oh, apparently I wrote that entire last entry half way through the set of reveals that is this part of Sons of Liberty – the big bombshell being that Snake and Otacon already knew all of this and were just waiting for you to catch up, which is hilarious and great. Even when Raiden is discovering massive world changing plot twists, he’s still lagging behind everyone else.

What I found interesting about this recap, which served mainly to fil Raiden (and the player) in on the context of what’s been happening to Snake since the first game and the Tanker mission, is how it continues to talk about the idea of terrorism as a PR tool. The Snake of Shadow Moses was a hero, built into legend, and they needed to run a smear campaign against him, and turn the public away from him. To do this, Snake doesn’t need to change, he continues doing what he always does and always will do, but his consistent actions are taken sometimes as acts of heroism, and sometimes as acts of terrorism depending on the framing.

As ever, the strength of Snake and Otacon’s convictions is what keeps them going (ALSO THE STRENGTH OF THEIR PURE FRIENDSHIP), who have their inbuilt sense of what’s right in a way that Raiden is only beginning to develop. He doesn’t know how to perceive the actions of The President, he sees him as a man he failed to save, rather than a man willing to sacrifice himself in order to save others and lay the groundwork for a safer world.

Sons of Liberty has gone from a game that doesn’t care about the player to a Collectivist Text in the last hour or so. All the themes are coming to the surface, and it’s not finished yet.

Vamp’s boss fight took me a good 40 minutes before I was able to beat it – Metal Gear boss fights have a strange rhythm that requires a great deal of time investment before you can figure them out. They have a ramp up, starting out with an easy introductory stage that introduces you to the concepts you’ll use to beat the boss, and by the end of the fight are complex challenges where you implement everything you’ve learned.

What this means is that whenever I fail, I have to play a good ten minutes of boss fight before I can even get to the part that’s challenging. It means Metal Gear boss fights are continually walking a knife edge between excellent and trash and there’s really little place in between. The Vamp fight was pretty great because I beat it when I realised I should be using different guns depending on the attack that Vamp was throwing at me.

Metal Gear structures each of its setpieces in this puzzle-like way, which means most of them have this moment where it clicks and I feel incredibly smart. But unfortunately, when it falls, like the Fatman bossfight from earlier, it falls hard.

I assumed this post would be the last one, because with Snake revealing himself to Raiden and Metal Gear Ray showing up on the scene, it felt like the game was really building to an ending. It turns out it just gets into the part where everything happens and stays there for hours and hours.

I don’t even have the level five card key! There were seven levels in the original game’s card key, and there can’t possibly be that many this time, right? Will we be playing Sons of Liberty forever? Only time can tell.

Next: A strange narrative detour by the name of Emmerich…