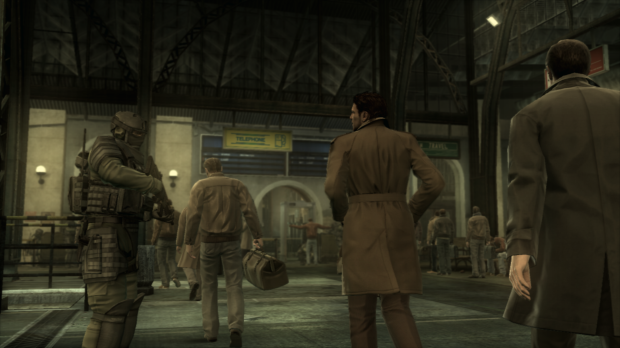 The setup for these posts is simple: I’ve never played a Metal Gear Solid game before, and I want to change that. I’m going to be writing my on-going reactions to the games as I go, and sharing them with the world. The Metal Gear Diaries are somewhere between a full critical essay and twitter gut responses, and will form an honest document of my shock, frustration and surprise at the events of, say it with me now, “Metal Gear?!” They will be packed with spoilers for all Metal Gear games!

Last time, we got a long and detailed briefing in which Otacon and Naomi totally did it with each other and Big Boss was revealed to be alive! Let’s go and say hi, in the famous country of “Eastern Europe…”

YAY! It’s the chapter that’s literally just a noir movie, holy shit I am so excited. That first cutscene was a blast, just this small little genre setpiece, using one of my favourite tricks in the book, the checkpoint queue. Like 95% of all spy thrillers could be boiled down to a man in a queue waiting for the way out to arrive. It’s tension incarnate and dressed in a trench coat, god it was great.

Snake Eater was a riff on James Bond, but Guns of the Patriots’ structure allows it to be way more loose and fun with its play on genre. The act structure means it can go from location to location, genre to genre, almost as if this game is more of a last ditch attempt to hit every single thing on Kojima’s “I wanna do this!” list rather than a way to wrap up the Metal Gear story.

The queue sequence is actually one of my favourite moments of direction in the games. The series is defined by having long cutscenes, but because this is a first play, I’ve not really been breaking down the cinematography of the games as perhaps I could. But here, this queue sequence, as an execution of a well-worn cinematic idea, is incredibly effective. The use of low angles which keep Snake’s clearly camouflaged face out of sight, the way the camera pans to highlight the crowd, the slow movement speed over gothic architecture, it’s a fantastic introduction of tone and place cinematically constructed.

It’s such a small and insignificant moment in the scheme of Metal Gear’s bombast, but it says everything about why this series – and in particular this game, which has been kind of meandering so far – is hooking me in.

Their interactions in act one, made it clear that Meryl and Snake were of two different generations, two different ideals, but this really dug into the melancholy of both of their situations. To Meryl, Snake is a legend and an icon who happened to become incredibly real through the intensity of shared experience. He is both a figure that she loved and a man that she loves, and seeing them so separated by not only rapid aging, but diametrically opposing ideologies is too much. There’s definitely a way to read the scene as the tragic tale of old lovers drifted apart, but I read it as highlighting their initial and constant incompatibility. Meryl wanted to be a Soldier, whereas Snake just doesn’t know how to be anything else. Meryl buys into the system which she is upholding, Snake merely knows it is not his place to question it.

Which is why their interactions here feel so sad, they’re two amoral soldiers working for two amoral ends – Meryl to attempt the obviously doomed method of using brute force to take out Liquid, and Snake carrying out a hired hit. Because of this, none of their attempts to convince the other to their side have any weight, they’re both standing on compromised ground. Meryl can’t accept that Snake is willing to go through with an action with which he does not believe, and Snake can’t accept that Meryl has any belief at all as a soldier.

When Meryl leaves Snake as neither friend nor foe, not only is it made clear the sheer stakes of this operation (holy shit, everyone on earth is after this Body), but the game underlines the loneliness of soldiers in this understated way. These four games have focused so much on the idea of The Soldier, on the tragedy of The Soldier and the way an individual is crushed by having to bear the will of the state upon their backs, but almost always in moments of death or betrayal or terror. This is none of those things, this is just two people proving themselves to be in this moment incompatible, and it is the understated nature of that tragedy in a series dripping with bombast which makes it hit so hard.

Also I want to say that it’s remarkable that the series manages to combine a study of the way the individual is crushed by the state and a pointed anti-capitalist critique, I don’t think you’d ever see those two ideas combined in a western game.

A city, in a Metal Gear game! A city with roads and streets and shops and signs and… okay, no people, but we’re getting somewhere. The atmosphere of this smoky Eastern European city is goddamn perfect, even though it is so clearly placed into a game not built for this kind of environment. It’s empty for a reason, which means we don’t get the sense of passing through crowds as we follow the guy but not too close, like this is some kind of Assassin’s Creed or something.

But aside from not quite getting the full crowd blending experience of playing Snake as a PI in a fifties noir thriller, everything else is intact: the breath in the air, the coats, the lights and the architecture. God, I love this chapter already. This game is great!

As a stealth game, Metal Gear often makes patience a central focus of its play, particularly in Snake Eater. You have to wait for guards to pass, you have to line up the right shot, and if you’re unseen there is usually little reason to rush your actions. The game’s scenarios set up a situation in which acting slower and rationally is vital to your survival and success within the areas you have to traverse. But this patience is almost always countered with options, an itemset with far too many weapons and gadgets for any one player to keep track of. The games emphasise patient play, but ultimately put the pace of the play in the hands of the player themselves rather than dictating a set rate.

This city section changes all of that. You follow a single, whistling resistance member through a series of increasingly complex and illogical stealth puzzles, and your every moment is reactive to theirs. There is no way to speed this up, you cannot arrive at the destination before your target regardless of if you know where to go. He even needs your help to pass certain obstacles and guards, in which you must act as a guardian angel and take out threats before they can damage him.

Much like the tracking segment at the end of Act Two, this is Guns of the Patriots playing with its own ruleset, and instead of giving increasingly complex encounter areas, it changes the focus of its mechanics in order to highlight the genre on which it’s trying to riff. When you track Naomi, the game emphasises Snake’s extra vision within a wooded location in order to form a sort of Hunter/Prey relationship between you and your target, as well as your enemies and you. Here, the focus of the mechanics is on Snake’s strange combination of power and powerlessness. He can’t go anywhere without a lead, he’s on the back foot narratively and needs to find his answers. But he’s the legendary soldier, able to rain down protection from above and ensure his unwitting ally can get to where he’s going safely.

Metal Gear games are always aware of their abstraction, aware of the ways in which they fall short of the expected rules of reality, and with that awareness are able to play into that. But here, when my target reacts with a ? above his head when I shoot three guys around him, and reverts to his path, I can’t help but feel that abstraction is shattered somewhat. It would be different if part of ensuring your target’s safety meant removing these bodies from view, but the game never pushes that far because as it’s currently designed, that would be impossible.

So I don’t know how to feel about this section. It’s atmospherically fantastic and its evocation of a genre that Metal Gear usually stays far away from is sublime, but technical and design limitations end up making it seem like an imitation of genre rather than an execution. There are brilliant moments, where you shift from streetlamp to streetlamp, staying behind a car as your target looks over their shoulder, your hands shoved into the pocket of your coat. But then you crouch behind your target for a block before tranqing a fellow guard in the head, and he doesn’t seem to notice.

It’s ultimately a good thing, I think, because I come down on the side of enjoying the fact that they tried to pull this off despite having a game built for completely different tasks. It still allows this brilliant change in pace and tone that wouldn’t have been possible without such a swerve, but the specific construction of the scenes and encounters unfortunately undermine that atmosphere. I’ll take rough earnest ambition over something safe, complete and coherent anytime, though.

And that does it, we made it to the house of Big Mama! We’re outside, we’re ready to enter, and we’re going to next time. The only two characters it can be are EVA and The Boss, as the only two unaccounted for female characters, and I highly doubt it will be The Boss yet. She’ll probably show up though, everyone else has.

Or, it could be someone new! Ha!

Regardless, come back next time as we head inside and see if we can’t get a little closer to finding ourselves a body.